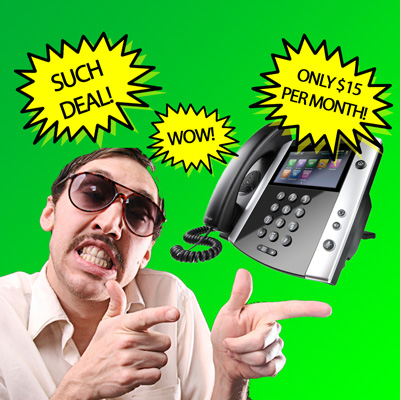 I read an article called ‘Why Hosted VoIP Makes Sense for SMBs,’ and while I do believe hosted VoIP is a viable solution eventually, there are some major barriers to overcome before I would say that it makes sense.  I get asked about hosted VoIP pretty often, and I tell people that I can’t in good conscience recommend it if their business is very dependent on reliable phone service.  There are two main reasons for this – the state of the hosted VoIP industry, and the lack of network understanding on the customer side.

First, let’s talk about the state of the hosted VoIP industry.  There are some major players out there that are all competing for your hosted VoIP dollars.  Unfortunately though, because of the feeding frenzy surrounding this space, quality has given way to lowest price point.  Every provider NEEDS to have a $15.00/phone/month option with unlimited long distance, or they just won’t be able to compete.  Vendors will even go so far as to have a $15.00/month option that is extremely feature poor ensuring that they can entice customers to their product, but ultimately upsell them to a higher price point.  While these companies are fighting for who can come out with the lowest price point, the quality and reliability of the product goes down the toilet.  It is hard to get Support, there are too many outages, and customers end up spending way too much time being frustrated with their decision.  The VoIP providers know however that once they have a customer, and their phone numbers are ported over, it’s an arduous process to switch to another vendor.  More often than not, customers will stay with a bad provider to avoid having to go through the hassle of switching.  It’s like starting a new relationship with a girl only to later find out that she’s completely crazy – you feel stuck because she’ll probably slash your tires if you try to leave, so you rationalize staying too long in a bad situation.

In addition, maintaining a reliable and redundant hosted VoIP solution is very expensive for hosted VoIP providers.  Having IT expertise to set everything up properly, more IT expertise to monitor and maintain the systems, plus all of the expensive equipment (x2 for redundancy!) costs hundreds of thousands if not millions of dollars.  It takes a LOT of $15.00/month handsets on desks to cover those costs, so most providers cut corners, and this leads to outages, issues, and security holes.

Secondly, the biggest problem with hosted VoIP is customer education. These hosted VoIP plans are marketed towards the SMB space, but most SMB’s don’t have dedicated IT personnel to make sure VoIP is the right choice, so they’re just assuming it will work.  It sounds great to buy some phones, throw them on desks, and not have to worry about servers or firewalls.  But wait…can your network handle VoIP?  Does VoIP work well with your ISP?  Is your network equipment compatible?  Network infrastructure and voice quality go hand in hand.  To make matters worse, hosted VoIP doesn’t work with every ISP, modem, and router out there.  For instance, the cable and fiber providers who bundle Internet, TV, and phone service in one will often send out modems that only prioritize their own phone service, and can not be configured with QoS for any other type of hosted VoIP service.  This means voice quality goes down and frustration goes up.  There are definitely network setups that will work great with hosted VoIP, but unless you have a bit of expertise in this area, it’s a complete crap shoot.

Now – finally, I want to talk about the three arguments the aforementioned article makes for hosted VoIP, because I think they are a bit misleading.

Maintenance – the argument here is that since SMB’s don’t have dedicated IT personnel, not having a server onsite saves money.  I disagree with this for a couple of reasons.  First, for reasons I have already mentioned, hosted VoIP is not as reliable as an on-premise solution.  It is dependent on your Internet connection, and the corners that the providers have to cut to make the price so low means that outages are more common.  When there is an outage, is it your Internet connection?  Is it the hosted VoIP provider?  Is it something in your network?  When outages are occurring more often, you actually need MORE tech expertise to get things sorted out – and also to be educated enough to know who is at fault.  Hosted VoIP providers and ISP’s are always pointing fingers at each other, and the customer in the middle suffers.  Using POTS lines or a fractional PRI plugged into an on-premise server utilizing VoIP out to the endpoints is a solid and reliable setup that can save money and frustration in the long run.

On top of that, regardless if you are using hosted VoIP or an on-premise solution, you still have to configure the phone system.  Plugging in the phones is a very small part of the overall installation process – you need to learn how to log into the phone system, do moves/adds/changes and configuration updates, know how to route calls, make recordings, view reports.  The learning curve with a new PBX goes well beyond the initial installation, and small business owners typically have bigger fish to fry, so they end up not taking full advantage of the features a VoIP system provides.

Cost Savings – this is a toss up depending on the situation.  For businesses with fewer phones, there can definitely be a cost savings to going with hosted VoIP – at least in the short term.  But keep in mind that hosted VoIP providers are a monthly recurring cost – an operating cost instead of a capital expense.  Let’s look at the numbers – for a 10 phone on-premise system, it would likely cost around $3000.00 to get fully installed and operational.  Even if you were actually able to get a $15/phone/month deal with a hosted VoIP provider (yea right), the ROI vs. the $3000.00 up front cost is only 20 months.  In other words, within 2 years, your hosted VoIP solution costs you more than an on-premise system – and if your on-premise system lasts the normal 3-5 years before you have to upgrade, then hosted VoIP costs you WAY more.  So, cost savings?  Short term – perhaps, but if you look at total cost of ownership, it doesn’t paint such a pretty picture.

Better Security – this is another toss-up.  Because hosted VoIP providers have to cut corners to bring customers the lowest per month price, they do not place as much importance on security as they should.  I know of a hosted VoIP provider who had two different security directors quit because their begging and pleading attempts to get the company to prioritize security were ignored.  There is no money to be made by investing in security for these companies – it is insurance.  They gamble on the fact that they won’t get hacked, and often they lose.  Reactive security measures are not really security measures.  Plus, hosted or not, if a customer decides to secure their account with a password of 12345, they’re going to get hacked.

In summary, hosted VoIP *can* work, and *can* be a viable solution if all of the pieces of the puzzle fit together perfectly.  But, if you’re switching to hosted VoIP just because you found the provider with the lowest price point, then be prepared to get what you paid for.

Chris Sherwood is a VoIP Consultant with Crosstalk Solutions based out of Oregon, USA.